Jazz up your Seder

Our seders were never boring. Over the years the seders went from "a seder" to a "great seder". I want to take a minute to pass along a few ideas that worked for us - and perhaps if you have a moment to contribute your ideas - that would be fantastic.


First of all it's important to have your children involved - that is really what it's all about... the next generation. It's written in the Hagaddah: "B'chol dor vador chayav adam leerot et atzmo k'eelu hu yatza mi'Mitzrayim". Every generation is obligated to see themselves as having left Egypt. In other words, the concept of 'Jewish continuity' is nothing new.

When children are involved in Passover preparation - it means more to them. It's obvious since this is the same thing for adults, the more you have invested, the more it means to you.

Project idea:
A nice and relatively easy art project that I used to do with my 3rd graders (about 8-9 years old) was to create a Pesach "coat" that they would wear at the seder. Take a white, or a single colored, pillowcase - take permanent fabric markers and let them decorate the pillowcase with scenes they could imagine from Egypt... slavery, hardship etc. By the way, make sure to place newspaper inside the pillowcase so the markers don't bleed through to the other side, ruining the work there. Cut the pillowcase in four places to create holes for the child's neck and arms and cut down the middle of the pillowcase so it opens up. (I hope that this makes sense.) The idea is create a jacket or a "coat" that they will wear at the seder. The thought behind this is for the child to wear it at the beginning of the seder until the dinner section of the Hagaddah symbolizing that they were slaves, but by finishing the parts discussing the slavery - we became free and they take their "coats" off. As an aside, I must thank my mother for coming up with this project.

While I'm actually typing this - I'm revising my thinking slightly - instead of making the "coat" only about slavery, why not decorate it half and half - half in the theme of slavery, and half in the theme of freedom -- pyramids vs. leaving Egypt. Pictures of the plagues, matza and kiddush cups etc. This way the child can wear their "coat" the entire seder (as long as they are managing to stay awake) and have something special of their own.

Decorating your house, or at least where you are hosting your seder:
* Frogs: Throughout the year, try and pick up a stuffed frog or two. If they have velcro on their "flippers" even better - hang them from your light fixture (not too close to the lightbulbs, avoid fire hazards please). The other ones you should try to place around the room - on couches, on the coffee table, tops of bookcases - make sure that they are noticeable.

The Plagues:
Obviously the Jewish People were not the focus of the plagues - the Egyptians were, but it's good to bring these things to life - children are experiential beings, in order for things to seep into their little brains, it has to be fun and something they can touch and feel.
* Ping-pong balls: While setting up for the seder, place about 5ish ping-pong balls in a cup next to each dinner plate. After you have read through the 10 Plagues - take a few minutes to whip those balls at each other... and behold, you have the plague of hail. Someone in charge will have to call a stop at some point, but before they do, give everyone a few minutes to enjoy themselves.
* Sunglasses: Get all-purpose cheap sunglasses and put them next to each dinner plate. Have everyone put theirs on before reading the 10 Plagues.
* Small plastic animals: Buy a package of small plastic animals and spread them around the table. Don't stand them up - this is the plague where G-d kills all of the Egyptian domestic animals.

Songs:
Try to learn some of the songs for the seder in advance. There are plenty of CDs and downloads of the classic (and more modern) songs that will move your seder along in a more enjoyable way. Singing is not only for the shower - let your kids see you involved as well.

Reading the Hagaddah:
Let everyone take a paragraph or two - go around the table, give everyone a chance to participate... it's a long night otherwise.

We have a collection of different kinds of Hagaddahs - each with a different commentary on the seder. Everyone at the table had a different one and when we came across a commentary that we found interesting, we would stop the seder, read the short commentary and take a few minutes to discuss what we had found. Everyone will find something different that will interest them... then switch Hagaddahs the next night. No one will be bored.

Just an interesting side note: Don't pour your own glass of wine/grape juice - we are a free people discussing the amazing things that G-d did for us. Slaves certainly don't enjoy a full meal where they can sit around, explore ideas and drink wine. Free people do. Slaves have to do everything for themselves - free people have others pour for them. Just a thought.

Have a wonderful, uplifting Pesach everyone. Oh, and remember - the holiday of Shavuot is 7 weeks after the first seder - a most important holiday where we received the Torah -- pure freedom without responsibility is just chaos. 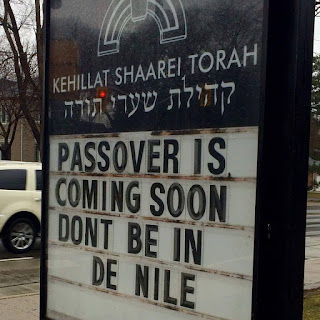 Just a reminder... Passover is coming! It's amazing, we gear up for Purim - you turn around, pack up the costumes and we're cleaning for Pesach. Unbelievable.

So between clearing out your dead food bodies out of the back of the refrigerator and vacuuming your car - take a look at these websites.

Great websites for Passover recipes, children's activities, learning about the holiday and basically everything else holiday related:

YouTube video on how to clean your oven with baking soda and vinegar.
(No, I haven't tried it yet... check me a couple days before Pesach!) - Update! It works!!!

Passover Cleaning From  HaRav Scheinberg, Zt"L
Stress Less And Enjoy The Yom Tov
I've been following these ideas for years. It's so important to enjoy Pesach.

More suggestions on cleaning:
How to clean for Pesach (Passover) in one day

I must stress a point here -- people take too much on themselves before Passover, in the name of the holiday. It's a mistake. Your goal is to get rid of chametz - leavened bread, cookies and things with flour in them... not to spring clean. If you want to spring clean, either do it before Purim, or after Pesach. If you take it on now, along with your Passover chametz cleaning, it may be too much and many people (women especially) end up resenting the holiday of Pesach. G-d did not give us this amazing holiday in order to hate it. I dislike that word "hate", but there are plenty of people out there who truly misunderstand what we are supposed to do in way of preparation for the holiday. Please don't be one of them. If you don't know what you are actually supposed to do to get ready for the holiday please check with someone who does know... drop a line here, or Ask Moses! Don't be shy.

Pesach is a great holiday with so many spiritual possibilities - don't lose your opportunity to grow past your limitations.

Happy Pesach everyone!!!
Posted by Shira at 12:21 AM No comments:

Email ThisBlogThis!Share to TwitterShare to FacebookShare to Pinterest
Newer Posts Older Posts Home
Subscribe to: Posts (Atom)
Hello All! Let me introduce myself: My name is Shira, I'm happily married, grateful to have four little ones under seven years old and be a stay-at-home mom. I also have masters degrees in both education and political science and have spent at least 19 years in Jewish education (14+ in the classroom). Love to write and get feedback!