In honor of Holocaust Memorial Day, January 27th, the day Auschwitz-Birkenau, the largest Nazi death camp was liberated, I lifted this picture and caption from Facebook. 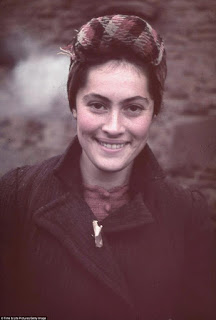 In the Kutno ghetto, this lovely Jewish woman manages to smile for Hitler's personal photographer. She was almost certainly murdered by the Nazis in the years to come.

The Germans first murdered all the elderly residents. 6,000 Jewish men, women, and children were then deported by truck or by freight train from Kutno to the train station at Kolo.

From Kolo they were sent by railway to Chelmno death camp where they were murdered in gas vans.

For that final journey, they were stripped of their luggage. Each soul had to pay between 12 and 20 marks for their ticket to death.

This week of International Holocaust Remembrance, we mourn for her and so many, many more.

This woman has never been identified. Her inner beauty shines through in this photo, the only one known of her. Never forget her.
Posted by Shira at 9:15 AM

Not just her, we can't forget Anne Frank and all the victims of the Holocaust.