Happy Birthday to Me! Twice! 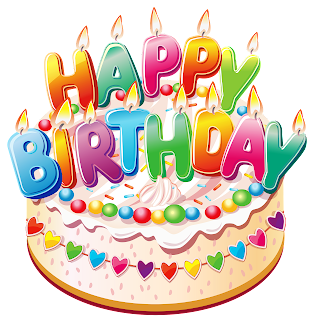 Happy Birthday to Me!

This past week was my secular birthday - I turned 41! Can't believe it. I always thought you had to be a grown up to have kids, at least to have three or four of them. Guess I'm a grown up now :)

Anyway, what's great about being Jewish (or at least one reason why it's great to be Jewish) is that you get two birthdays. A secular one, the calendar we are all used to - and a Jewish birthday according to the Jewish calendar.

My Jewish birthday doesn't come for another 3-4 weeks approximately. It's the 12th of Av. My mother (of blessed memory) used to say that in between the secular birthday and the Jewish birthday was chol hamoed, a semi-celebration -- basically keep a higher level of celebration than you would normally but not birthday level - then celebrate birthdays on both ends. It's kind of like we have for the holidays of Passover and Sukkot, 7-8 day holidays, the first days and last days are serious holidays and in between the first/last days is chol hamoed, still holiday, but not celebrated at the level of the first/last days.

If you want to learn when your Jewish birthday is - check out this website and it'll help you figure it out. What's also great about this website is that it tells you other events in Jewish history that occurred on your Jewish birthday. Mine is Nachmanides' disputation of 1263 - which happened that year to coincide with my secular birthday July 20. Of course, I've read the disputation (it's not that long, it was in English, and so so important to understand why Christian missionaries are wrong) - and when I realized that it landed on both my secular and Jewish birthdays... it totally blew my mind. Just so you know, your secular and Jewish birthdays intersect every 19 years (or sometimes come one day after the next, why? I don't know.)

Jewish Birthday Calendar
Posted by Shira at 12:00 AM